Who is the Famous ‘Gabigol’? 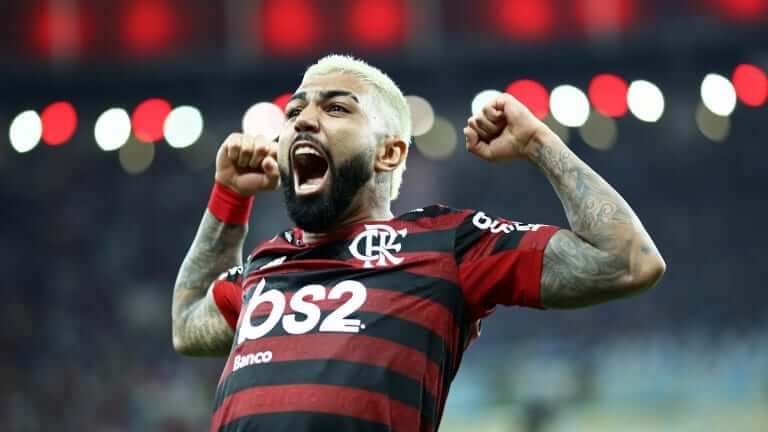 Flamengo’s talisman is a household name in Brazil, but not so much in Europe – so today we provide an answer to a very important question … who is ‘Gabigol‘?

Gabriel Barbosa, affectionately known as ‘Gabigol‘ in Brazil, has led the line for Flamengo over the past two years and is already the fifth highest goalscorer in the club’s history. Having initially joined on loan from Inter for the 2019 season and notching an astonishing 43 goals in all competitions, it’s no wonder the Brazilian champions made his move permanent; in doing so he became the most expensive player in Brazilian football history, with a price tag believed to be somewhere in the region of £15 million.

Born and raised in the state of São Paulo, Barbosa’s talent was first noticed at eight years of age when, playing futsal for São Paulo, he scored all six of his team’s goals in a 6-1 win against Santos. From there, he was quickly integrated into the Santos youth system, where he went on to score more than 600 goals and became known to all at the club as Gabigol … for quite obvious reasons!

A 16-year-old Gabriel Barbosa made his first-team debut for Santos against none other than Flamengo in 2013. The Brazilian media often touted Barbosa as ‘the next Neymar’, so it seemed very fitting that his Santos debut was actually Neymar’s last game for the club before his illustrious move to Barcelona – a passing of the baton, if you will. In fact, in similar fashion, and after showing early signs of the exciting and skilful attacking play he is now renowned for, he sealed a move to Italian giants Internazionale in 2016, for a fee of just over £26 million.

Though this was supposed to be Gabigol’s big break in Europe, in reality it wasn’t all plain sailing for the young Brazilian. Given limited opportunities and living largely in Mauro Icardi’s shadow, Barbosa only managed one goal in a mere nine appearances for the club, and a loan spell at Benfica proved even less fruitful.

In 2018, however, Gabigol found himself back at the club where he began his career – and he was back with a bang! His barren spell in Europe was soon forgotten as he rediscovered his goalscoring form right from his first game back at Santos, as he went on to score over 20 goals over the 2018 season. Flamengo came calling in January of 2019, and the move to Rio de Janeiro was by far the most successful of Barbosa’s three loan spells whilst on Inter’s books.

With 43 goals over the course of the season, Barbosa helped his side to win the Campeonato Carioca, the Série A title and the Copa Libertadores. As well as his already impressive list of team honours in Brazil, Gabigol boasts an impressive résumé of individual honours: he’s won the golden boot six times across Série A, the Copa do Brasil and the Copa Libertadores, as well as the remarkable record of being the only player to have finished as the top scorer of the Copa do Brasil and Série A in the same season. Some truly phenomenal achievements!

A lot of strikers in world football would be happy with these honours by the end of their career, but Gabriel Barbosa is still only 24 years of age … so this might just be the tip of the iceberg for our beloved Gabigol!

The young phenomenon made his debut for the national team in a friendly against Panama back in 2016, and has surprisingly only represented his country five times thus far. For a player widely regarded as the best striker currently in South American football, and who has already suggested that he wants to make a return to Europe “when the time is right”, I wouldn’t be at all surprised to see Gabi scoring gols for the national side and a major European club sooner rather than later.