When Pavel Nedved Almost Came to England in 2000 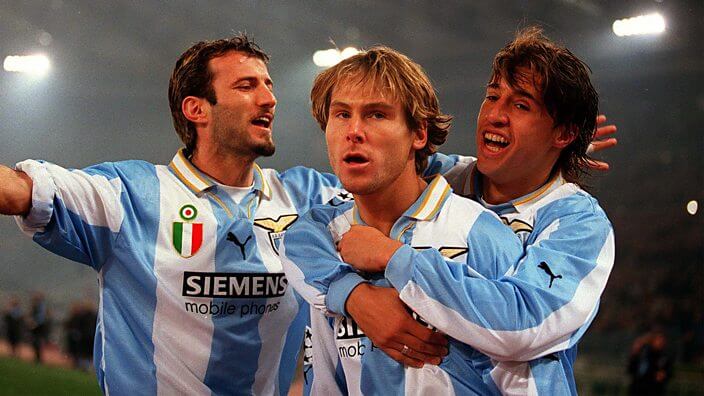 Before Pavel Nedved’s more noticeable stint at ‘The Old Lady’ in Serie A, he was adored by a simpler and wholesome Lazio fan-base.

La Furia Ceca (‘The Czech Fury’) had an illustrious time in Rome; achieving the domestic double in the 1999-00 campaign along with other club and personal honours, including the Ballon d’Or. So, although many football fans would associate Nedved in a Juventus outfit, I’m sure the Lazio ultras will never forget his impact on the team throughout the late 90’s – especially with that late winner against Mallorca in the last ever Cup Winners’ Cup final. What you may not know, however, is that we were close to seeing Pavel Nedved playing in the Premier League.

Before he signed for Juventus in 2001, he was heavily linked with a move to either Manchester United or Chelsea. Both of these English clubs had put a bid in for the Czech midfielder, which was strongly considered by the Lazio president at the time, Sergio Cragnotti.

The Biancocelesti (The White & Sky Blues) were looking to reinvest their money, which could establish themselves as a leading team in Serie A and – probably more importantly – the dominant side in the city of Rome. Nedved was particularly well known to United fans, as he helped Lazio defeat them in the 1999 UEFA Super Cup final. Sounds very similar to what happened with Cristiano Ronaldo, don’t you think? A ‘let’s try and sign the player that had a great game against us’ type of reaction.

And although Pavel Nedved did eventually sign for Juventus – which Lazio fans weren’t best pleased with – to replace Zinedine Zidane, I can’t help but think how well he could have done in England if he took the plunge. Well, his style of play and ability suggests that could have done very well!

Predominantly, Pavel Nedved was played on the left side as a winger and was recognized for being comfortable (understatement!) using both feet. Some of the most iconic goals he scored were from cutting in on his right foot and striking the ball from distance. But what made him appear well suited to the Premier League was his physical qualities and willingness to work off the ball. Other than moments of pure quality, Nedved guaranteed the fans and his teammates lots of energy and a strong work ethic.

So, I think that if he had joined Man United, following his impressive performances with both Lazio and Czech Republic, Ryan Giggs would have had greater competition for that left midfield position – no disrespect to Jesper Blomqvist! Sir Alex Ferguson didn’t get a lot of transfers wrong at United and I think it is difficult to see Pavel Nedved falling into that sad category, but his name would have ranked among one of the more outstanding inclusions in United’s enviable ’90s EPL roster.

These are all ‘ifs’, ‘buts’ and ‘maybes’ of course. His career turned out pretty well (another understatement) without a move to the Premier League. Nedved spent eight seasons at Juventus, which included a year in Serie B because of the Calciopoli scandal. Many players decided to leave after that, but Nedved showed commitment to help his club return to the topflight. Just another reason to appreciate ‘La Furia Ceca’ and his football legacy …

And don’t you worry, there will be plenty of timing in the future of Ultra United to discuss the brilliance and overall playing legacy of Pavel Nedved – particularly within our Icons section. But sometimes, it’s fun to play a game of transfer make-believe – it gets our juices going, doesn’t it!

How do you reckon Pavel Nedved would have fared in the English Premier League? Comment your thoughts down below!