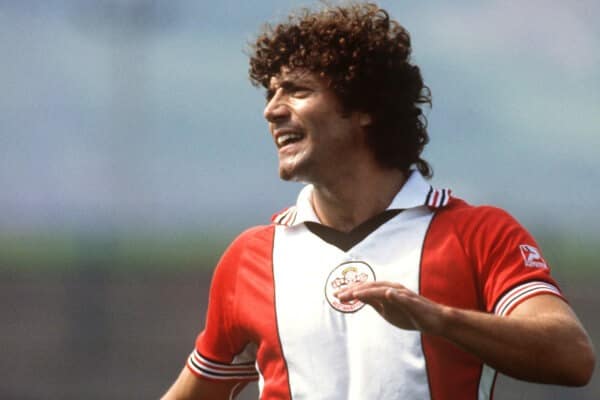 Kevin Keegan was always the sort of man who looked to blaze a trail that others wouldn’t dare to do. And his twilight move to Southampton proves it!

Imagine the scene: Ralph Hassenhutl takes his seat in the Chapel Arms (the local pub for Southampton supporters) “I’ve got a bit of a surprise for you, lads” he grins. Out steps current Balon D’or holder Lionel Messi to a chorus of gasps from journalists. The best player in the world will be playing in the red and white stripes of the south coast club for the coming years. Ridiculous, right? A transfer that would only occur in a FIFA career mode with the negotiations set on amateur. However, in 1980, the dream became reality.

In 1980 Kevin Keagan’s time at Hamburg was drawing to a close. Citing a fear of burn out under the gruelling training regime placed on the squad by strict Hamburg manager Branko Zebec, Keegan searched for pastures new. Keen on a new challenge in a new league, Keegan was tempted by Juventus, even reaching the stage of wage negotiations with Bianconeri. However, in his autobiography ‘My life in football’ Keegan states the main factor in not joining the Turin side was his wife Jean. “you can go to Italy, but I’m going home to England” as far as ‘the King’ was concerned, that was that … and he was coming back to England. ‘Happy wife, happy life, right?’

As part of his contract with Hamburg, Liverpool had first dibs to bring back the current European player of the year to Anfield. However, the Merseyside outfit had moved on, a team that boasted Dalglish and a fresh-faced Ian Rush did not have the space for another mercurial talent like Keegan, this begged the question, where does Kevin Keegan go next?

In 1976, Lawrie McMenemy led 2nd division Southampton to their first (and only) major trophy in a 1-0 win against Man United, the Saints continued their success with promotion to the 1st division and established themselves as a top-flight side with an 8th place finish in the 1978/80 season. McMenemy was ambitious and had heard rumours that the European footballer of the year was on the move, but how could he entice him to the south coast of England? Well … the idea sort of … came to him!

The Southampton manager had a quite literal lightbulb moment. When redecorating his abode in the New Forest, the designer recommended a particular light fitting that would go above the staircase, the issue, explained the fitter, was that the light bulb was only manufactured and sold in Hamburg. McMenemy immediately set about getting contact information for Keegan and promptly called him to ask if he would bring the lightbulb back when he returned to England on international duty.

Unsurprisingly when Kevin Keegan and McMenemy met in person, football was the only matter on the agenda. Refreshingly, it was pretty simple to persuade Keegan to join; the Yorkshireman admits in his autobiography to being fond of the idea of being a big fish in a small pond and was sold at the idea of playing with good friends Mick Channon and Alan Ball. The competitor in Keegan also enjoyed the though of taking a small unfancied club like Southampton to the English title.

So, the stage was set, McMenemy alerted journalists of a press conference at the Potter Heron pub in Romsey to unveil a signing who would ‘play a big part in Southampton’s future’. Keegan flew into Southampton airport in complete secrecy, evading any journalists at the airport or on the way to the announcement. Only the Southampton and Hamburg managers and owners knew of the transfer, none of the players were; nor any journalists.

McMenemy took to the stage “I’ve got a bit of a surprise for you, lads”. Out steps European player of the year, serial trophy winner and English football superstar … Kevin Keegan to a chorus of gasps from the journalists present. What started off as a friendly chat about lightbulbs ended up as one of the most remarkable transfers in British football history and absolutely nobody saw it coming, Saint Kev had arrived!

Although Keegan didn’t quite achieve his dream of leading Southampton to the 1st division title, he still enjoyed relative success with the club as they finished in 6th place in his 1st season (their highest league finish) and 7th in his second season. McMenemy’s idea of football was that a team should have 7 road sweepers and 4 violinists and Keegan would often control crowds like a skilled orchestral conductor. Every ground they played at that season boasted their highest attendance. Coincident? I think not!

After his second season where Southampton were top in April until a horrendous run of form saw them drop to 7th , Keegan’s relationship with McMenemy soured.  Keegan believed Southampton did not match his ambition and chose to drop down a division to play for Newcastle United and develop his own dynasty in the North-East. The Following year Southampton finished 2nd only three points behind Liverpool, this left many Saints fan to question, what if …?

Comment down below with your personal equivalent of this Kevin Keegan move today! I’ll go for Ronaldo at Burnley haha!