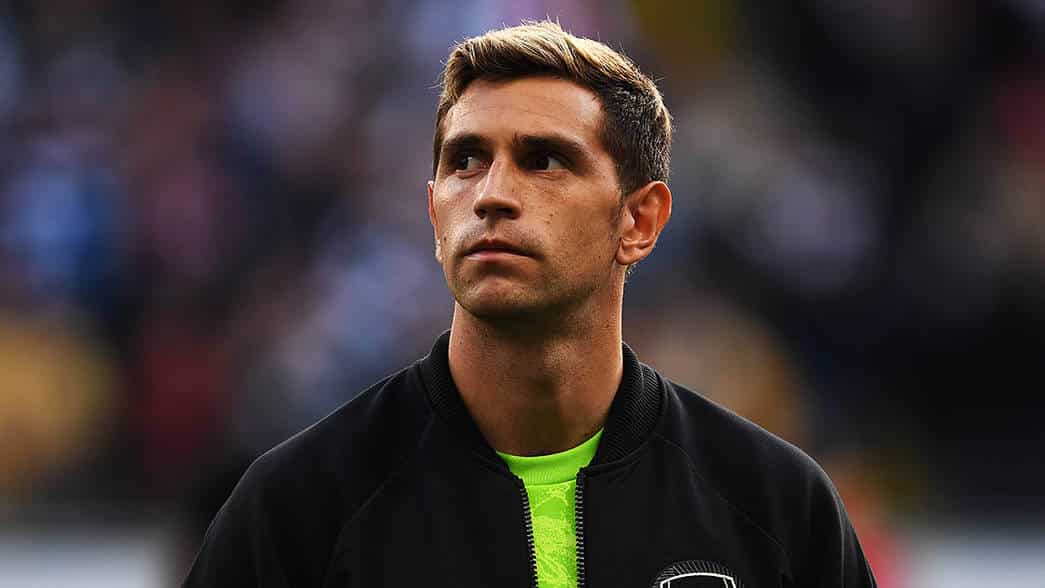 A season which I’m sure many Aston Villa fans will remember fondly for their team’s overall performance, ‘Villains’ the world over must marvel at the striking development of their stopper, Emiliano Martinez.

At the age of 17 years of age, after a successful trial with Arsenal, Emiliano Martinez took a gamble and moved to England without his family and unable to speak the language, with the ambition of becoming a professional goalkeeper and to help support his struggling family from a financial viewpoint.

After developing his talent in the Arsenal youth set up and being given his first professional contract, between 2012 and 2019, Arsenal sent Martinez on loan 6 times, to League One, the Championship and even a disastrous endurance in La Liga with Getafe where he only made 5 appearances – an absolute pittance for a brought-in goalkeeper, wouldn’t you agree? Martinez spent half his 20’s largely struggling to make an impression throughout his loan moves to put him higher in the Arsenal pecking order of goalkeepers at their disposal.

However after the departure of Petr Cech, a small breakthrough in North London finally came, Martinez was granted the position as Bernd Leno’s number two for the 2019/2020 season by Unai Emery. Yet although playing well when he was called upon, Emiliano Martinez’ time behind the sticks was restricted to Carling Cup (or whatever it’s called now) and minor Europa League matches at a time when the team’s form had taken a huge nosedive.

After the sacking of Unai Emery, and the subsequent lockdown, it looked like another frustrating season as Arsenal’s goalkeeping bridesmaid was on the cards. Undeterred, Martinez spent the lockdown keeping fit and sharp with the hope of an opportunity at Arsenal to arise, or seek another loan move at the finish of a strange season.  There had been murmurings after some impressive performances that Arsenal had a quality goalkeeper in their squad, but the form and hype of Bernd Leno meant that opportunities still remained bleak upon resumption.

On the 20th of June 2020, a sunny Saturday afternoon in the South coast brought a much-deserved stroke of luck for the Argentine – with Emiliano Martinez being selected for the remainder of the campaign after injury struck Bernd Leno in an ill-tempered affair. After that loss, and with Martinez behind the sticks, Arsenal won 5 of their remaining 8 games … even going on to beat Manchester City to reach another FA Cup final against Chelsea.

Martinez was so impressive in goal for Arsenal that day; displaying a commanding calmness which filtered through to a back four very low on confidence, and pulling off outstanding saves like Piers Morgan does an insensitive turn of phrase ( … too soon?). He also seemed to have excellent distribution, looked very good at claiming crosses and even more comfortable playing out from the back; crucial for the archetypal ‘Gunners way‘ as we all know.

Although Martinez had impressed many with his excellent League performances and in the FA cup run, it was the final against Chelsea were he really won the hearts of the Arsenal fans and the respect of football spectators around the country.  As he demonstrated such confidence and assurance for such a seemingly inexperienced stopper. His emotional post-match review of events shows exactly what this must have meant to Emiliano Martinez.

The 2020/2021 season started with an impressive outing in the Community Shield; giving Arteta faced an even tougher decision with two outstanding keepers at his disposal upon Leno’s return. However, realising his worth, Martinez decided to leave for Aston Villa in a £20million deal under the promise of the sort of first-team regularity he’d been starved of at The Emirates. Impressing early on in Villa colours, he also fulfilled one of his own career dreams being called up for the Argentina squad for the first time.

This Villa side with Emiliano Martinez etched onto the team sheet have looked a far cry from those drop-drifters of the previous year; and largely thanks to his incredible last-ditch solidity in goal. IMO, he has a strong case to be considered one of the signings of the season, considering the impact he has made for such a reasonable price.

At the time of writing, Martinez has an impressive show-reel of truly amazing saves, and boasts the second-highest amount of clean sheets in the League with fourteen … only one behind that Brazilian fella behind a certain league runaway team in Manchester. The moving story of Emi Martinez’ rise is nothing short of incredible, and only he will be able to tell us whether a year ago he envisioned he would be where he is today.

From a frustrated figure at the periphery of Arsenal’s thoughts for 10 years to arguably the best goalkeeper in the Premiership in the space of a year, his story is proof that with hard work, a positive attitude and patience, fulfilling your dreams are achievable even if they seem so distant at the time. He is a perfect example of someone who snatched their opportunity with both hands and never looked back.

What do you make of Emiliano Martinez’ meteoric rise in the EPL? Let us know in the comments below!