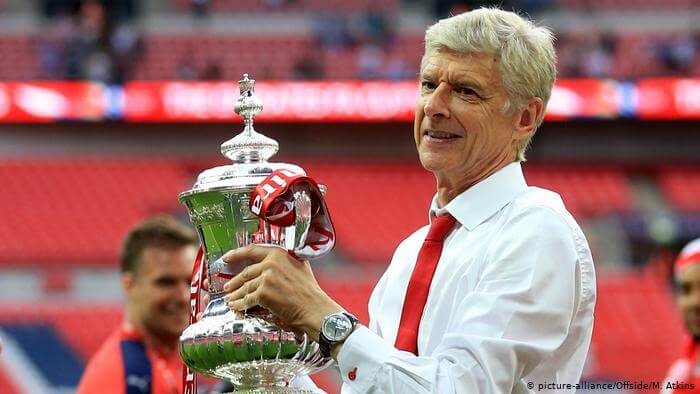 Arsene Wenger was a lot of things in the era of early Premier League football, but he was also an absolute fiend for the famous FA Cup in his later years at Arsenal Football Club.

Fans could be returning to stadiums in time for the FA Cup Final at Wembley Stadium, according to recent reports. So, with the prospects of some good news, I took a trip down memory lane to look at the most successful manager in the history of football’s oldest competition.

“There’s only one Arsene Wenger!”

Despite a period between 2005 and 2014 without a trophy, Arsene Wenger managed to win his seventh and record-breaking FA Cup before leaving the Gunners. The Frenchman had also led Arsenal to three Premier League titles in the 1997-98, 2001-02 and 2003-4 campaigns. The latter resulting in an entire season without a single defeat – an achievement yet to be matched in the Premier League. But for all of Wenger’s success, he has been known to supporters for his distinguishable career as an FA Cup winner.

“Arsenal have had some fantastic times in the FA Cup. I have to mention about when we knocked out Tottenham in the 2013-14 season, which was an added bonus for us that year. And then to be playing against Hull City in the final, I have to say as an Arsenal fan, I was feeling confident. When we went 2-0 down in the first few stages of the game, I thought it might be time to give up on sport and leave along with Wenger at the end of the season. But that spirit came back and, amazingly, we turned the game around to win 3-2. Finally, our long wait for a trophy was over!”

Arsene Wenger’s last few seasons were not so rosy, however. We can all remember the ‘Wenger Out’ signs, which became a worldwide meme. Posters were even found in WWE’s Wrestlemania event, among other weird and unexpected places. Considering how influential he was to Arsenal and to the entire league, the criticism didn’t feel justified amongst some fans.

One of the longest-serving managers of the Premier League era has no doubt made an indelible mark on English football. However, the way in which Wenger’s reign ended seems to have left a sour taste in the mouths of a certain amount of today’s Arsenal followers …

Lifelong supporter and regular attendee of Arsenal matches Sam Mackay has said: “There is a feeling amongst many Arsenal fans that he should have left after the FA Cup against Hull City in 2014. However, he was then rewarded with a new contract from the Arsenal hierarchy.

People will point to the fact that Arsenal had to sell players to fund the stadium move. I completely understand that, but when you actually look at the names [of players Arsenal sold], many of them were let go for free or for next to nothing. We had a great 10 years under Wenger, but unfortunately he overstayed his welcome far too long and to this day we are still cleaning up Ivan Gazidis’ and Arsene Wenger’s mess.”

Arsene Wenger was recently asked, whilst on beIN SPORTS, about whether he had ever sold a player that he didn’t want to. To which Wenger replied, “many times”. And perhaps fans who currently have an ill-feeling towards Wenger’s latter spell at Arsenal ought to think about this when creating an overall assessment of the legendary Frenchman in North London. But nevertheless, there’s a case to make on either side of the discussion.

There are lots of decisions made within clubs, which fans do not get to see. Whatever the motivations for Arsenal and Arsene Wenger were in terms of buying and selling players, the Gunners have a unique record as the club who currently hold the most FA Cup triumphs. A distinctive achievement that Arsenal supporters can look back on – and one which traces its success directly to the escapeless influence of Arsene Wenger.

Let us know what you think of Arsene Wenger and was he more than just the King of the FA Cup?

previousPut Some Respect on Carlo Cudicini’s Name!
nextFour Summer Signings Lighting up the Premier League in 2020/21!