Rivaldo & His Valuable Deportivo Spell in ’96 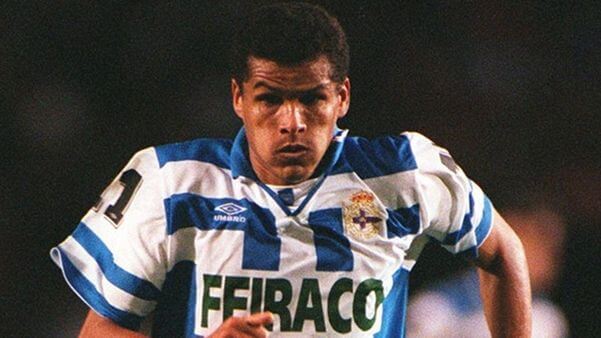 Of all the top Brazilians that pop up into our minds whenever we think of the great samba nation’s history in this game we love, I’m surprised that this guy doesn’t come up a little more often …

If you aren’t really aware of what this man was capable of in his prime, then let’s just say that Rivaldo was one of those players that the purists of the game can sit back and watch with ease. A footballer whose professionalism and elegance just oozed out of him with every touch of the thing at his feet.

But back in the early ’90s, this entire concept of Rivaldo being considered as one of the best players of all time, was an enormously distant idea to where his career was headed at the time. In fact, it was at somewhat of a cross-roads having enjoyed a rather nomadic spell back home in Brazil. One which took him from Santa Cruz, to Mogo Mirim and even a loan move to the mighty Corinthians before seeking some refuge in the attacking midfield at Palmeiras.

Modelling that luscious green kit and sporting a hairstyle and moustache which somehow made him look older than he was, it was clear to see that Rivaldo wasn’t your typical midfielder. And that’s predominantly down to the various ways in which he chose to drive at defences and launch an attach upon his unassuming opponents.

Reputable publication, Placar Magazine, eventually labelled the meandering Brazilian as the best player in his position by the end of 1995 – with Palmeiras earning the coveted Campeonato Paulista trophy the season after. A year which would come to signal the end of Rivaldo’s stint in his homeland, with multiple clubs from Europe’s inner circle beginning to catch wind of this handsome lad who was on the market for a relative pittance.

Strangely enough, it would be Deportivo La Coruna who would attract the playmaker’s attention enough to make a move there for the 1996/97 season – with the Spanish club’s openness to bringing friend and compatriot Amaral apparently proving key to Rivaldo’s decision to join. Whatever the reason, it was quite the season for all involved.

Maturing his generally deeper-lying position at the heart of the midfield in a Trequartista capacity, Rivaldo became an unadulterated goal field in his one and only season representing Deportivo. Not only did he end up with 21 goals in 44 appearances that year, but he also ranked as the fourth-highest goalscorer in the entire division – and remained the only player from a midfield position to compete with the league’s strikers at the time.

Inevitably, Rivaldo courted the attention of even bigger clubs in Spain and ended his successful third-place finish with the club by moving to FC Barcelona, under the personal request of manager-cum-Sporting-Director, Sir Bobby Robson. Well, let’s just say that the great man was rarely ever wrong in his assessment of most young footballers during his time in the game. And this case was no different at all!

What do you make of Rivaldo’s time in Deportivo and how important do you think it proved to be for his resulting career. Let us know in the comments below!