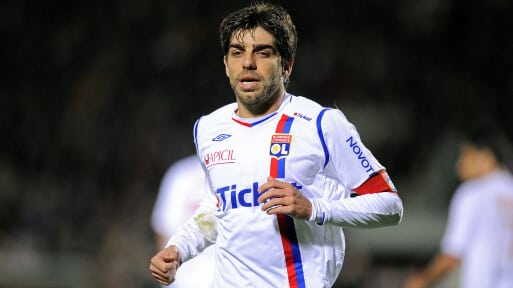 Unfortunately for some I will not be chatting about the magical maestro who played for Middlesbrough during the mid-to-late nineties. Some in the North East will acclaim him as the more talented of the two Juninho’s, but it’s the ex-Lyon hero whose trademark free-kicks made him a household name around the time that you were probably begging your Mum for a Match! magazine. Ah, those were some good times, dammit!

This is where I remember him from, this and on an old ‘Lovejoy and Redknapp’ compilation DVD where looking back at it, it seemed as though every free kick scored in that time was scored by this man.

If you haven’t already, treat yourself to watching a compilation of his genius. He was renowned for his free-kicks and is arguably Lyon’s greatest ever player having won seven consecutive titles with the club between 2002 and 2008. He adopted almost a knuckle ball style but would often strike the ball with the side of his foot rather than the traditional technique of using your laces to generate the power and dip.

There were few players in world football who you would expect to score when they stood over a set piece, but Juninho was one of them. He went on to score 77 career free kicks, a feat which comfortably places him on the top 10 list of all-time. His set pieces were perhaps a crowning glory of a career spent almost entirely in France and Brazil’s Serie A.

This is not to say his career was undervalued or he was underrated, but it begs the question as to how his career could’ve escalated had he managed to get a move to one of the big boys. He could have easily held his own at the top clubs in Europe at the time so for want of a better word  he was the furthest thing from being a free-kick merchant.

After retiring in 2014 Juninho had amassed 18 trophies for club and country – from whom he also won 40 caps in an era which boasted a talent pool for the ages. He managed to get a glimpse of tournament football as well in 2006 where he scored a 30-yard belter against Japan in an underwhelming Brazilian campaign. As I’ve said before, do the right hing and look at a compilation of Juninho’s free kicks they’re something quite special, so good I’ve mentioned it twice. His influence in Lyon is fixed, retiring in 2014 but returning as sporting director in 2019. You know what, we’ll make your life easier and give you a video here. You’re welcome!

As a player, Juninho’s legacy will remain in tact as one of – if not the – best free kick taker of all time, with his longevity and skill solidifying his place as one of the best midfielders in Europe throughout the 2000s.

At risk of sounding too romantic I’ll keep this bit brief but Juninho was one of the first icon’s I and many others of similar age looked up to at the time. In a pre-mobile phone age we as a footballing community were galvanised by superstars such as those we speak of throughout the archives here at Ultra UTD. He, alongside countless others bred a generation of fans who fell in love with the game for what it was. Juninho. For me, epitomised this feeling, the knuckleball might as well have been Klingon to me, I didn’t understand it or how to do it but it looked magnificent.

Get your thoughts about the wonderful Juninho in the comments below and wish him a ‘Happy Birthday’ on social media too!

previousWelcome to Vale Farm: The Home of Wembley FC
nextHow to Become a Professional Football Player in 2021