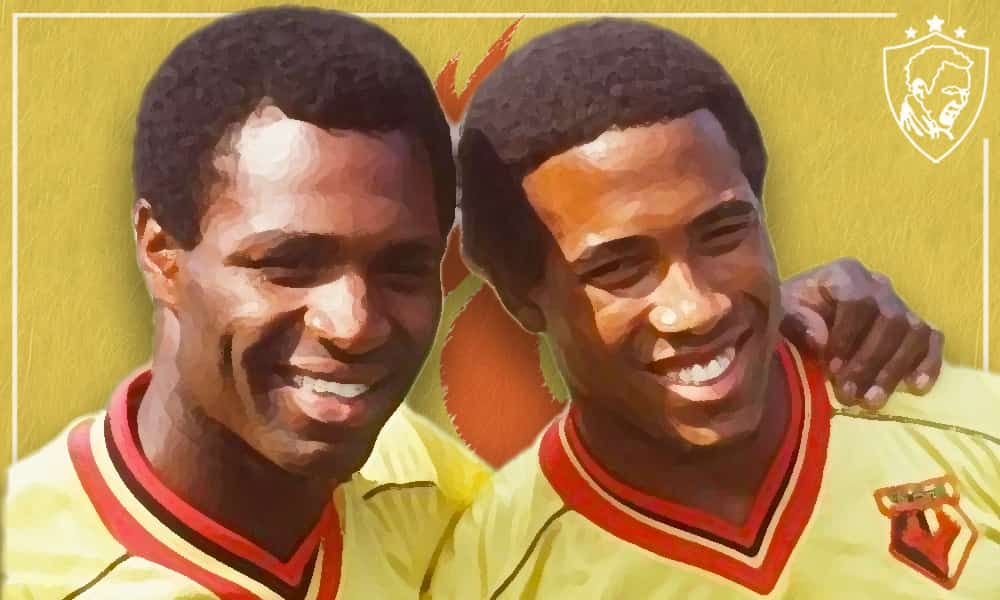 Yes, I know his name has been used as a pseudonym for a few bands in the past, but for us, this title belongs to one heck of a striker from the English First Division period.

To fans of Watford all over … Watford, Luther Blissett is a player who will always be remembered fondly by the Hornets. Born into an era where black footballers were predominantly ostracised from the old-fashionedness that pervaded our game, he shone through as a delightful example of why that type of mindset needed to change.

Originally from Falmouth, Jamaica, Luther came to the UK when he was young enough to become overawed by the nation’s favourite pastime … and to get into one of the better academies in the land. He turned professional in 1975, with Watford languishing somewhere in the Fourth Division of English football, and their status as a lower league club reduced the bars to entry for someone like Luther Blissett to burst onto the stage as freely as he did.

Unbound by the expectation of being a Division One club, Luther Blissett really came into his own in the 1977/78 season under new manager Graham Taylor. Soon, the pair would set sail on a journey which would result in both of them representing their country with their respective virtues. It took a while, but still … it worked out!

His first year under Graham yielded little return, however, sensing an inaugural topflight campaign on the horizon, Luther Blissett and co. really decided to switch it on the following year as he scored 21 goals en route to claiming their place in the Second Division for only the second time in their history as a football club.

After consolidating their efforts to remain that high up on the pyramid, their star striker proved instrumental in claiming that elusive top drawer promotion by 1982. Where he remained the club’s top goalscorer (as he did for the preceding three seasons) to secure their place among the country’s elite. To make things even better, Taylor didn’t want his men to sit back and potentially risk falling back from whence they came.

Instead, they really took the division by storm, and finished second to only Liverpool by the summer of 1983. By which point, it didn’t take long for the clubs bigger than Watford (of which, no offence, there were quite a few), that Luther Blissett – among many of their star players – were there for the taking if the money was right. Soon enough, and only two seasons after Justin Fashanu became the first black player to break this barrier, Luther Blissett was the subject of a £1 million from another club. And they were a big one! They were … the great A.C. Milan!

Unfortunately for buyer and purchase, the transaction didn’t quite live up to expectation. Spending no more than a solitary season at the San Siro, Luther Blissett could do little more than muster up a rough goal involvement in every six games while in Milan colours. So little was the return, that it caused some of the more ignorant pundits out there to surmise that A.C. Milan must have bought the wrong player!

Coming to prominence at around the same time was winger and maverick John Barnes, and the rumour soon spread that Milan’s lack of knowledge (and sight, apparently) forced their hand in mistaking a move for Blissett when they really wanted Barnes. Just when you thought you knew everything about ignorance in sport, ey? *sigh*

For a number of reasons, this simply couldn’t be true. Best summed up by respected Italian journalist and TV presenter Gabriele Marcotti: “First, even the most ignorant and provincial person could see that Blissett and Barnes looked absolutely nothing alike. Second, the fact is that at that time Milan were looking for an out-and-out goalscorer and Barnes just wasn’t that type of player.” There was method to the madness, but it was just one of those things where it didn’t work out. Nothing more.

What do you remember most of Luther Blissett’s move to A.C. Milan from Watford in 1983? Get them down in the comments below and share this with fellow fans on social media!