Ali Daei: The Ultimate Forgotten National Hero of the 90’s 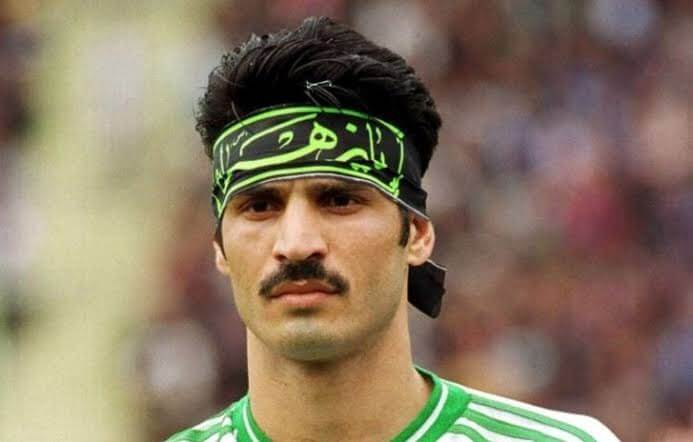 If you were asked to name the top men’s international goal scorer of all time I imagine your answers would all be largely similar. Like Ronaldo, Messi, Pele – something of that nature.

But anyone who guessed any top European or South American for that matter, would be wrong. The top international goalscorer is Iran’s Ali Daei. Yeah. So how about you stick that in your pipe and smoke it? Unless it’s an e-cig, in which case … plug it in and … blow? Idk …

Standing at an impressive 6ft 4 inches, Ali Daei scored 109 goals in 149 caps amassed over 13 years playing for the Iranian national team. Undoubtedly an international legend, his club career did not follow the trajectory you may suspect of a man with over 100 goals at international level.

Daei did make it to one of Europe’s top 5 leagues playing for 3 teams in the Bundesliga including perennial champions Bayern Munchen. However, his 5 year stint was very stop-start in terms of game time and output, and he returned to Asia having scored just 19 goals in 5 years in Germany’s top division.

However, do not be fooled by his small return in European football, this man is a bona fide football legend. His goal to game ratio is bettered by only 5 men in the top 100 international goalscorers and he is one of only two men to score 100 international goals (a feat he shares with Portugal’s Cristiano Ronaldo).

He led his team to two Asian games wins, in 1998 and 2002 respectively as well as two AFC Asian Cup bronze medals in 1996 and 2004, he is also the record goal scorer in that competition.  These achievements led him to being inducted into the Asian Football Hall of Fame in 2014, one of only 10 players to achieve this feat.

The managerial career that followed his playing career has been less spectacular. Whilst there was brief success at Saipa FC his success ran out there and he subsequently led the Iranian national team to their worst ever World Cup Qualifying campaign, with only 1 win in 5 games in their efforts to make it to the 2010 World Cup in South Africa.

He has never stayed as manager of a team for more than 3 years and has had 10 different managerial positions at 9 different clubs (returning as manager of Saipa FC in 2017 only to be sacked after the 2018-19 campaign).

All things considered, the fact is that Ali Daei is undoubtedly and Iranian National team icon – and should be remembered for this over his relatively underwhelming club career. His tally of 109 goals remains the highest ever in international football and, although it will soon be taken over by the incessant record-breaking Ronaldo, until that time he will not only be the highest scorer in international football, but a great pub-quiz answer to boot.

Use one word to describe Ali Daei for Iran in the comments below!