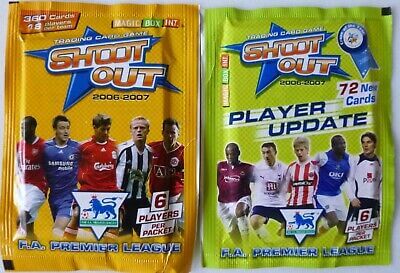 I guess you can call me a ‘simple man’ by saying this, but I think that Shoot Out cards were better than their more modern alternatives.

By ‘modern alternatives‘, I’m referring to the Match Attax franchise. If you haven’t seen these things before, then just imagine a really jazzy-looking football trading card with your favourite personality etched in gold across them and an innumerable amount of attributes surrounding them.

The idea of this format was to make the game far more engaging and, when playing against somebody else, you could at least line up your go-to team opposite theirs and compare them with the stats provided. Better stats basically means that you’re a better person than them, and they should probably throw their whole card collection away – I don’t make the rules!

All of this sounds wonderful to the untrained mind, and I’m sure that the boffins over at Topps don’t regret their decision to launch the Match Attax franchise after Shoot Out cards ceased to exist in 2007. But personally, I kind of miss the imagination and simplicity of his predecessor.

It reminds me a little bit of the Lego and Meccano developments in recent years. Back in the day, you’d get a select few simple pieces which required your own thought process to make sense of them. Now, they’re certainly more impressive but … clinical and antiseptic. They don’t allow your mind to wander like they used to, or appreciate their original form.

With Shoot Out cards, you didn’t have this attribute rating system, you simply had the player, their name, a simple star rating and a ‘special edition‘ depending on how good they were. In fact, I’m looking at my 2005/06 collection now and can only see 7 ‘Match Winner‘ cards – reserved for only the brightest and best players in the league.

Nowadays, they have special cards coming out of their behind – and it cheapens its value! When I was a kid, holding a limited edition Thierry Henry card was like investing in Bitcoin before it shot off. Now, they’re about as common as a chocolate coin left in the sun. I get that kids nowadays want more and Topps have responded to that, but the nostalgia in me will always think that they made a mistake in throwing away the Shoot Out innocence for the Match Attax attention.

Did you ever collect Shoot Out cards? If so, what was your favourite card? Let us know in the comments below!