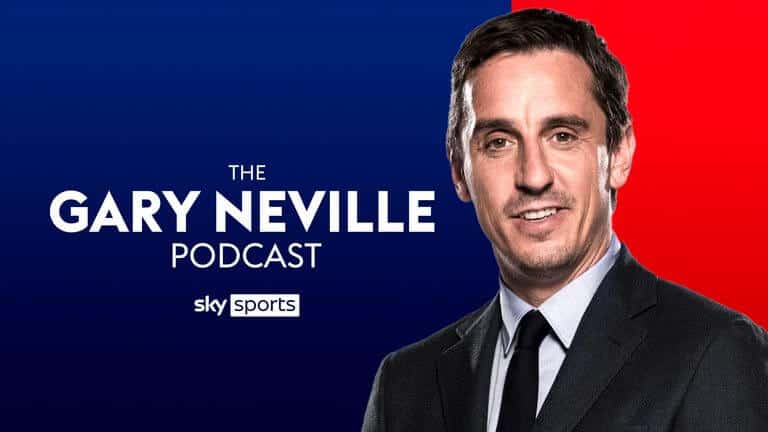 Given his rise through the media punditry ranks at Sky, it seemed as though the invention of ‘The Gary Neville Podcast was nigh-on inevitable!

As a Manchester United fan, I will always hold a very positive view of Gary Neville in my mind. After all, he was a stalwart from our famous ‘Class of 92’ grads and cemented his reputation as a fiery, passionate right-back for nearly two decades! ‘He bleeds red‘ … as he says!

But even I didn’t predict that he would be such a calm and collected pundit in his footballing afterlife. On commentary, his skills to remain impartial and fair are second to none to the cast next to Martin Tyler on Super Sunday, even if he does make the odd funny noise or two in the process!

For me, the inception of The Gary Neville Podcast (while it may have been started behind the scenes long before this), was his eye-opening story about his time as manager of Valencia. Without wanting to save pride in the face of brutal honesty, Neville was exceptionally fair in his assessment of what was a poor professional decision, and one where he looks back to focus on how it allowed him to develop, as opposed to where he was stifled.

My own respect for the man increased massively after listening to this and it’s an interview that I’ve watched and re-watched a number of times. Similarly, with the Class of 92: Out of Their League / Full Time series, as I become absorbed by the man’s true passion and dedication to the game.

As such, I half expected that his passion would pass through to the viewer/listener via The Gary Neville Podcast – given that they are recorded so soon after Manchester United games in particular. But instead, I believe that Neville deploys a very considered and well-rounded approach to his analysis of this Manchester United team and their potential.

At the time of writing, United are reeling off the back of a very good 0-2 win away at Manchester City – thus ending their rivals’ pristine winning run, and extending their own commendable away record. It was also the first time in United history where a Manchester United manager has won all three of their inaugural away Manchester derbies.

So, there was a lot to get excited about – yet The Gary Neville Podcast was bereft with a number of careful statements to bring the United clan back down to earth. And I must say, in this world of incendiary comments and click/view-obsessed media work, I’m really glad that I can tune into Gary every week for a stable, well-thought-out review of what’s gone on.

What are your thoughts about The Gary Neville Podcast? Get them down in the comments below!