Harry Redknapp: A Great Manager with an Even Better Personality! 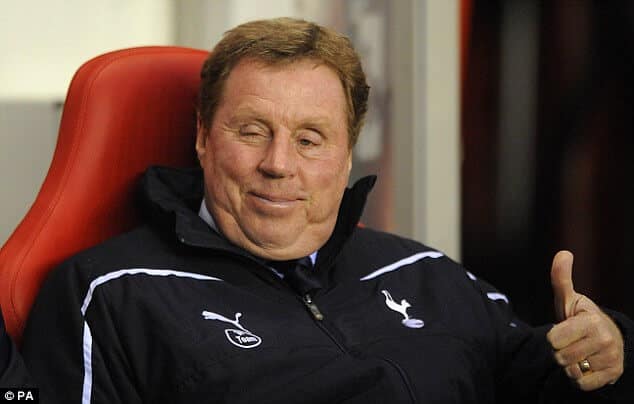 Inherently personable and overtly passionate in a sea of sterile faces, it takes a heart of stone to not be taken in by a man like the wonderful Harry Redknapp.

I think if anyone these days mentions the name ‘Harry Redknapp’, you get bombarded by a barrage of his recent accolades. King of the Jungle on ‘I’m a Celebrity Get Me Out of Here,’ Horse owner, author et al. It seems the more time goes on, Harry Redknapp is forgotten for his managerial successes. Above all else, Redknapp was a football manager, and arguably one of the last English managers to manage a top team in his home country. Now one of TV’s biggest personalities this is my bid to refresh fans’ memories on someone I believe to be one England’s best managers.

To begin with, Harry isn’t very well known for his playing career; with stints at West Ham, Bournemouth and Seattle Sounders appearing relatively insignificant to his managerial CV. After retiring, Redknapp took over at Bournemouth in 1983 after being assistant manager for the previous year. In his first season in charge, he helped the Cherries survive relegation and enjoy a famous FA Cup third round victory over Manchester United (which is still well-remembered on the South Coast). Eventually, Redknapp led Bournemouth to a Third Division title with a club record of 97 points; which drew the plaudits and attention of English football’s ‘bigger players’.

In 1994 Redknapp would move to his boyhood club of West Ham United -working as an assistant to Hammers legend Billy Bonds, this later would see him take the managerial seat full time due to Bonds resigning from the club after a boardroom fall-out. Misfortune for Billy turned to a lucky break for Harry, as his time in East London would prove to form the beginning of an outstanding managerial journey for him.

After earning his topflight stripes with West Ham, revered spells at Tottenham Hotspur and Portsmouth followed. During his time in blue, finishing 7th in the Premier League and a famous FA Cup Final win against Cardiff wrote his name into Pompey folklore. Forgetting an awkward segue to local rivals Southampton, Redknapp travelled over to London – where he was able to bring together his wealth of experience to a jaded Spurs side in need of renovation. Needless to say, he didn’t disappoint, and his time there forms the bedrock of his overall legacy in the topflight …

Lovingly known for relying on the same players across multiple clubs e.g. Peter Crouch, Niko Kranjcâr and Jermaine Defore, we mustn’t forget his commitment to developing youth products. After all, he famously remarked that then-Hammers youngster Frank Lampard “will go right to the top” and “has everything to become a top-class midfielder”, and this is not an isolated incident for him – with future internationals Michael Carrick, Joe Cole and Rio Ferdinand owing something back to their time with Harry Redknapp.

On the flip side, I think there will always be a question mark over Redknapp’s managerial style. Known as a manager who let his players do the talking on the pitch; it’s something that has attracted some criticism through his career. I think anyone with a footballing brain will understand that he would never just tell his players to “go out and play”, but perhaps this mantra was always going to leave fans longing for some tactical discipline.

So, was Harry Redknapp given the chance he deserved to create history with the England national side, or did he fall victim to his own reputation? Well, that’s something you should ponder over. Although I don’t believe Redknapp would’ve ever taken England to tournament glory, I do believe that the FA should’ve given him the nod over Roy Hodgson in 2012. But alas, even ‘Cloughie‘ was overlooked on that one during his time! Harry also had moot court case surrounding ‘improper approach of players‘ clouding his application which probably didn’t help him out very much!

The Hodgson choice came as a shock to many; who felt he lacked a certain killer instinct needed to take the team to its peak during another so-called ‘Golden Era’ for the England national team. Falling foul to an Andrea Pirlo special at Euro 2012 and an ignominious defeat to Iceland four years later proved many of us right, before Gareth Southgate gave us a Summer to remember in 2018 – I still think it’s coming home, tbh!

Altogether, Harry Redknapp is like the ‘Godfather of football‘; idolised by many, hated by few, and always leaving fans wondering in anticipation of what he’s about to do next. Idk about you, but I miss seeing him every week!

What are your honest thoughts on Harry Redknapp? Let us know in the comments below!

previousHow Linkedin Can Help You Land a Job in Football!
nextWhy You Gotta Watch ‘Anelka: Misunderstood’ on Netflix