I heard … Dayot Upamecano is Man United’s No.1 Target! 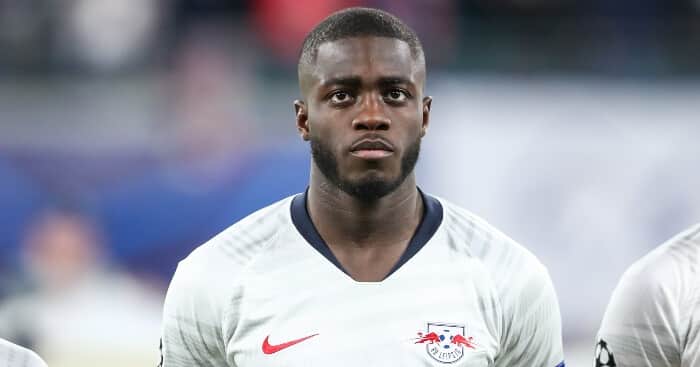 How we live in a world where a player of Dayot Upamecano’s is available for around €40 million is beyond my comprehension!

Let’s take a brief moment to reminisce over what has been a very good season for the Red Devils under Ole Gunnar Solskjaer. Playing an expansive brand of football which pays an homage to what he was made to do as a player, the Norwegian’s Manchester United team are bereft with quality from its foot to its top.

Silky forward movement, stand-out midfield performances and chances aplenty, it’s a major step in the right direction for a club which is used to being where they’re currently stationed.

Having said that, the year’s peaks haven’t been without its troughs. In fact, some may say that for every strong United performance – one which breathes some belief into their title run – there’s been an equally crippling fall from grace to send them crashing down to Earth … as the reality of their backline deficiencies set in.

Adam McKola from the well-informed (and delightfully well-rounded) YouTube channel, Stratford Paddock, isn’t the only one who feels like the title race could be over for United following their 3-3 capitulation to Everton this past weekend. I think so too! And as is clear from that match as any, the club will never be able to truly press forward without their foundations being as sturdy as their front line is inventive. For me, this is where Dayot Upamecano comes in.

For so long, Manchester United have been linked with a lot of creative quality. As we know, they’ve been flirting with the idea of signing Jadon Sancho for what feels like forever, but I reckon they need to stick that on the back burner and make Dayot Upamecano a priority. Why? Just look at that Everton performance. Or the Istanbul one. Or that Spurs one, for that matter! It’s clear that there’s no balance in their back line.

Harry Maguire and Victor Lindelof seem to be Ole’s favourites at the moment. But both are neither mobile or confident enough to keep them stable. And unfortunately, neither Eric Bailly or Axel Tuanzebe are either reliable or experienced enough to make up for the aforementioned lads’ deficiencies at stride or in the air. But Dayot Upamecano on the other hand, is the ideal solution. Big, strong, imposing, can improvise when needed, intelligent in his play and selective in his choices, he’d be perfect.

Recent reports have suggested that clubs such as Chelsea, Liverpool and Bayern Munich are leading the race to sign the Frenchman, but Manchester United really need to pull their finger out here. That’s not to say that purchasing Dayot Upamecano would completely solve the problems at the club – which extend far beyond the turf upon which he would work – but it would go a damn large way into solving their issues on it. If I were head of their recruitment team, it would say ‘Dayot Upamecano … and the rest’.

What do you reckon? Will Dayot Upamecano join Manchester United? Let me know in the comments!